LinkedIn Polls – the older you are, the more network savvy you get!
11th October 2010 - 6 Comments

Logging in to LinkedIn this evening – I was greeted by a LinkedIn Poll. Not been asked to participate before – and the question was relevant (sure they’re watching me!)

What is the most important aspect of a business membership organisation? 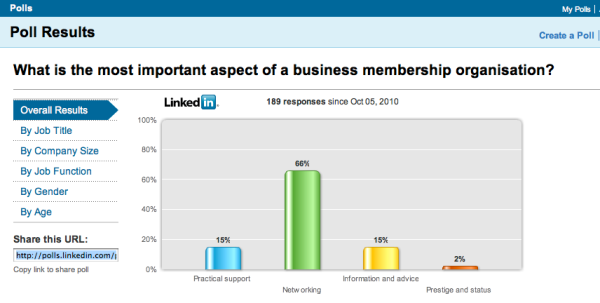 No real surprise there – but what’s great with this LinkedIn service is that they give you the ability to drill down/cross tabulate the responses. The most fascinating statistic was the age analysis. At one extreme 83% of the 55+ age group give a thumbs up to Networking – but surprisingly less than a third (29%) of 18-24 year olds went for Networking. 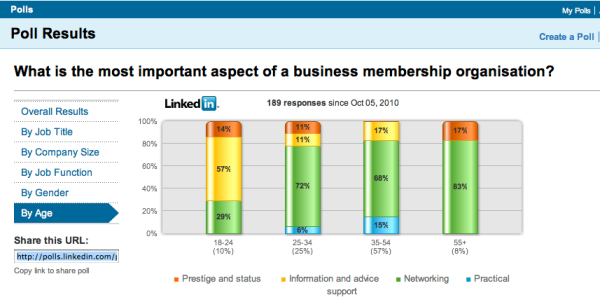 Maybe the Twitter/Facebook generation is not as Personal Network focussed as we think? 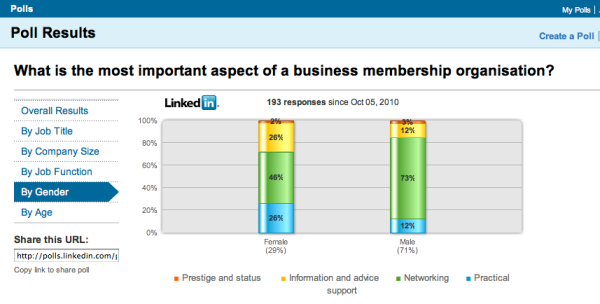 And equally “stereotypical” are the stats segmented by Job Title. Biz Dev execs rate Networking at 83% – whereas those Finance guys have it down at 33% Networking/33% Practical … and the final stereotype Marketing is 71%/0% Practical!! Go figure… 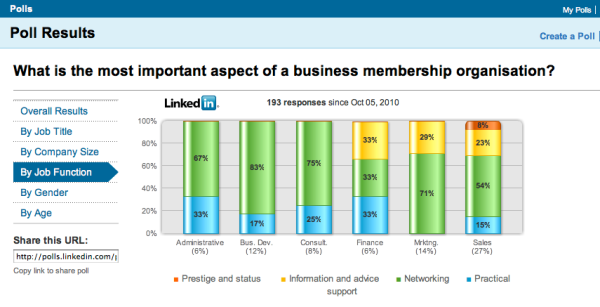 Check out the stats for yourself at LinkedIn Polls. Would be interesting in how you read the stats!?

6 responses to “LinkedIn Polls – the older you are, the more network savvy you get!”

I’m just coming to the end of my 2 month stay in New York City. It’s been a great place to explore the theory behind my startup business, Climbing Fish. I’m even more convinced that it’s quality connections and conversations that help people to do great things (and for some reason we have stopped doing […]

There’s a small news story in today’s FT Weekend about BNI (Business Network International) making an award to the UK’s most successful networker. Step forward 36-year-old Simon Johnson, who is a flooring specialist from East Anglia. The story is on the FT website – but you will need to register to get access. The story […]

I really don’t like the “what do you do?” question. I don’t like to be asked it – and I try not to ask it of others (although when my limited smalltalk dries up, it has been known). However, I realise that these days before we meet, I might have “googled” you – and you […]

I’ve been surprised as I explore the idea of the Personal Network that there is so little focussed information. For example, a search on Google (UK version) for “Personal Network” gives very few relevant links on the first page. Highlights are:- A Wikipedia entry – that seems to be by an East European, Pawel Zorzan […]